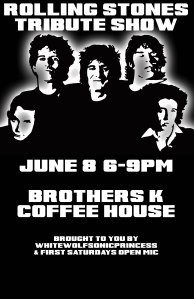 We did our Stones Tribute show on Saturday. 10 acts performing 25 Rolling Stones songs; an intimate coffeehouse setting, an enthusiastic and attentive audience. Lots of smiles and positive vibes. Our band did a little mini-set of some of our favorite Stones songs: “Shine A Light,” “Sister Morphine,” “Paint it Black,” “Satisfaction.”  And then there was the big singalong at the end on “You Can’t Always Get What You Want.”

We were happy with our set, no screw-ups, and we brought a real abandon and energy to the songs. The band was tight. We were a little concerned; rehearsals were clunky and a little messy, but all that evaporated in the heat of performance. We rode the wave of energy to r&r glory! There was the “post-show glow,” with the neighborhood buzzing about a great show, and there was the “post-show funk,” that inevitable feeling of emptiness after a show. The smoke clears in the light of day, and it’s all gone.

One major mishap: someone set a cup of water on my amp, and of course, the cup got knocked over, and well, H2O and tube amps don’t mix. The amp came up DOA, so I had to play through another amp, and the sound just was not the same. Turns out my amp is fine. I took the tubes out, let everything dry out overnight, re-installed the tubes, turned it on – all is well! Yes, of course, it’s only r&r but we really, really love it! – Jammer