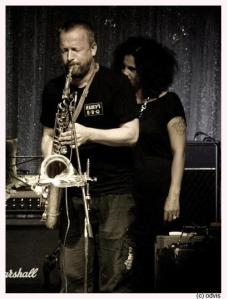 It’s a very cherry thing when you discover new music.  And it’s not often you get to say, “Wow, never heard anything quite like that before.”  That’s Neneh Cherry’s 2012 record “The Cherry Thing.” It starts out as kind of a cool r&b/hip-hop thing and then turns into an intense jazz thing. And then goes back to the melodic r&b thing, and then back to an Ornette Coleman or John Coltrane thing, and then well, it’s both things simultaneously, with Mats Gustafsson blowing monster lines on tenor and baritone sax and Neneh’s slinky, supple voice dancing above and around the storm.  Mats leads this little ensemble called “The Thing” and they are so tight and loose, cool and exuberant. An amazing sound. There are originals and some cool covers of songs from Suicide, Iggy and the Stooges, Don Cherry and Ornette Coleman.  This a record that both Carla and I fell for immediately.  It’s not a record you can just put in a box. It isn’t background music. It demands attention. It’s unique, original, uncompromising.  It’s also melodic, swinging and soulful. It’s a very, very cherry thing! It’s all right! – Jammer